Some time ago, there was a page in Helsingin Sanomat -newspaper, that cought my eye - and I bet many others, too. There was a full page article about a sauna competition participants (the same competition which sadly claimed a life of the Russian finalist and put the other one in the hospital for quite a while). The article showed several pictures of men posing in their swimming trunks looking rather serious, they were, after all participants in a sauna world championship. It would have been a nice, humorous page, but up in the header was a small Nazi flag pointing to another article later in the newspaper.

Since we tend to look at the pictures first, no matter how big is the text, the first thing most readers (me included) obtained from that page was the Nazi flag (first, since red is the most striking colour and the flag was on the top) and a bunch of half-naked men trying to look cool. I can't believe that layout was intended, so I must think that someone had a pretty huge lapse at work. Or maybe the editor thought that it's long enough from the WWII for anyone to get annoyed. (Unfortunately, I didn't take a pic of that page and when I thought of it the paper was already in the bin outside.)

I find the whole concept still rather interesting. The amount of emotions the Nazi insignia wakes in a common person like myself is astonishing compared to the fact that I was born 35 years after their time. But in the Western culture, we are constantly being brainwashed to connect everything "Nazi" with "ultimate evil". I don't underestimate the unbelievable pain and suffering of those times and don't try to forget. But I do sometimes find it frustrating how the only two ways one can talk about Nationalsocialism is either loath it as overtly devilish or ridicule it to make it look funny and laughable. Any other point of view is considered to be sympathetic.

And still, there are many aspects that are often overlooked. First of all, of course the feelings anything related to Nazis still awakes in people. That's why editors and designers need to be very careful to think what is the message, like in the Helsingin Sanomat page I mentioned. The other thing is that the Nazis were superb designers who really knew how to put up a captivating show. Albert Speer was of course the most notorious designer, but his products are nowadays often considered rather pompous and revolting - again more out of the collective pressure. (I've been to Berlin for half a dozen times. I don't think Speer's architecture, that few that survived, is really terribly different from anything else that time and just before it.) Of course it was a bit over the top, but when you think of some big modern rock bands performing, it's obvious that people love good shows. 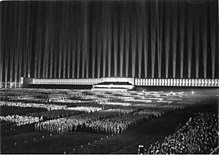 The Nazis didn't really invent much anything new. They were just very good at using already existing things to their advantage. They were using the same cornu copia the designers are using today - the history and symbolism of humankind. I've seen many times different designs that somewhere in the unconscious mind connects with Nazi design. They have to be subtle, of course, but the impact is striking, because we connect so many feelings with them. Just an eagle with spread wings do bear a small connection with the Nazis - intended or not, wanted or not. The eagle is noble and powerful being, and still used as a symbol of the country in Germany. Note: I used to be really interested in the morality issues related to Nazi Germany. I had dozens of books about the subject, even if I sold most of them before moving to New Zealand. I still find the questions regarding it worth thinking about and not just go with the flow chanting "Nazis are bad". Luckily, there are lots of people, who also think the same way. History is never worth forgetting, because people hardly change, after all.
Posted by Eka at 6:03 PM 2 comments:

I finally managed to finish one of the acrylic paintings I've been doing for some time. Well, I haven't actually haven't done it, it's been laying around half-made for ages. But one evening I actually felt like continuing it and painted the rest of the stars in the globular cluster painting on the left in the picture. I thought it wouldn't turn out very well, but it looks ok to me now, after all. Maybe I should start doing these for sale... ;)

I even bought an acrylic finish to coat the paintings. It cleared the colours a bit. Can't wait to do more! I managed to move to another flat. Here I'm even entitled to hit nails to the walls, so the place looks pretty decent already. It's a very pretty house from the early 19hundreds, so the rooms are nice and high and there's even a roof terrace. :) The school will start in the end of this month, so we'll see how the new semester will look like.
Posted by Eka at 7:32 PM No comments:

I got a band shirt from one of my friends, but it was men's L size. Even women's XS is sometimes too big for me (it's unbelievably hard to find suitable clothes), so I had to be a bit creative, because I didn't really want to stuck it somewhere in the closet and forget it there, because it's actually quite valuable... And I like the radioactive sign in the sleeve.

So, I took in quite a lot from the sides and made it slimmer also in the back plus added some holes for a ribbon. Cute. :) (I should move during this month and my room looks like a pigsty, so you have to be happy with an empty corner as a background.)